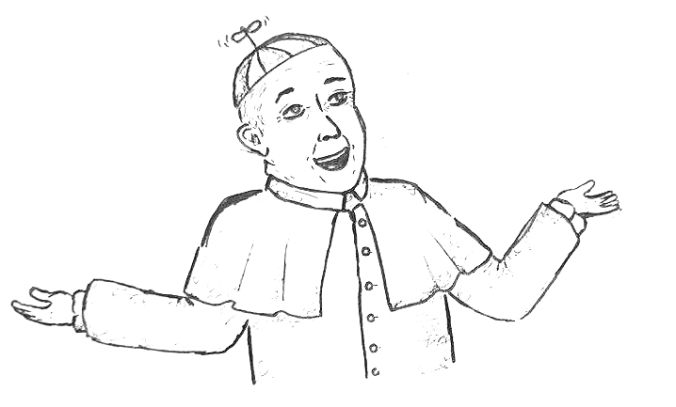 *Not for the easily offended

I’m in a bit of a pickle here. I feel as though I’m different from the rest of my mates because I really, really like to party. Not party as in go to Dtwo and then Coppers afterwards, but party as in I like to dress up my cats and rave with them to Tiesto old-school tunes. I also like to snort brown sauce. It’s not a hallucinogenic or anything like that, I just enjoy it. Am I too weird? Will people accept me for being different?

I hope things are well for all of you at the nunnery. I have heard the rumours about the antics and I am amazed that it is only now that you have plucked up the courage to tell me about your party lifestyle. To be honest, I think you deserve a lot of credit for your honesty and I for one am very glad to see you sister’s enjoying yourselves when you all have days off from your spiritual duties. I too like to be different – tell me again how many Popes chose the name Francis before me? Yes, that’s right, none. That’s because I am Number One. I really wanted to be Pope Max Power Hercules Chuck Norris the First, but they told me after the conclave that it would be inappropriate. Not because it’s a silly name – just because there was another Pope with that name in the 9th Century who was a bit cuckoo. Oh well, I guess Francis will have to suffice.

YOUR SINCERE MOST GRACIOUS HOLINESS,

Bishop Brennan here. I haven’t been right in the head since that time Father Ted gave me a right kick up the arse. I know it’s nearly 17 years ago at this stage but you just don’t do that to a man of God! I know you are God’s representative on Earth and all that malarkey, so can you advise me on how best to overcome a traumatic experience from the past? Loads of my congregation tell me about their traumatic experiences like killing people and stuff in confession, so at least I’m not the only one struggling. Uh-oh, did I just break the sacred vow of confessional secret-keeping? Shit. Uh-oh, did I just swear in a letter to the Holy Father? Shit.

Thanks for getting in touch. I know how you feel, the Swiss Guards tend to give me a boot up the arse every now and then when they’re feeling a bit mischievous. I mean, people aren’t supposed to even touch the Pope let alone kick him up the arse! Messers. I guess they think I’m an easy target because of how liberal I am in comparison to my predecessors Johnny Paul and Benedict (the 16/17th/18th? Can’t remember). Also, breaking the confessional vow is a serious breach of Vaticanally religiously priestly holiestly rules and regulations. I ought to have you excommunicated. OJ, I’m so liberal I don’t even care.