Almost 41 years since his footprints were the last to leave the Moon’s surface, Apollo astronaut Captain Eugene Cernan speaks to Shane Hannon about his remarkable life.

Many people are aware that it was Neil Armstrong who took that first “one small step” on the Moon in July 1969. The Commander of the Apollo 11 mission spent two and a half hours exploring the Sea of Tranquility with his lunar module pilot, Buzz Aldrin, in what would become the culmination of President John F. Kennedy’s pledge eight years before of “landing a man on the Moon and returning him safely to the Earth” before the end of the decade.

Man’s first period of exploration of our celestial neighbour came to an end in December 1972. Twelve American men stepped on the lunar surface on six separate landings, eight of whom are still alive, and each of them have phenomenal stories to tell.

When it comes to ranking them on how eloquently they describe the experience of walking on the Moon, it is easy to argue that Captain Eugene Cernan comes out on top. Cernan was born in a suburb of Chicago in 1934 and will enter his eighties next March, but one could be tricked into thinking his time as an astronaut was only last week after speaking to him.

Prior to being selected by NASA, Cernan was commissioned as a United States Navy Officer through the Naval Reserve Officers Training Corps at Purdue University. Flying jet interceptors off aircraft carriers was what he had always longed to do, and so he became a naval aviator and did just that.

Cernan spoke about these real life ‘Top Gun’ experiences saying, “Landing aboard a carrier at night, particularly in reduced visibility and rough seas, may be the biggest challenge a human being can have in his life.”

NASA made a habit of choosing these early astronauts based on their ability to handle pressure situations, and flying jets in testing conditions certainly comes under that heading. It is clear from Cernan’s description of his early days in the Navy that his retiring rank of Captain was hard-earned.

“You’ve got to land on three, four hundred feet of runway bouncing in the middle of the ocean like a cork, and then they turn out the lights at night-time, and it’s only you and your maker. When you train to get to that point as a naval aviator, I think it demands more of you, and as a result you end up demanding more of yourself.”

Selected as one of fourteen astronauts in NASA’s third group in October 1963, Cernan’s first assignments were related to Project Gemini. This follow-on program to Project Mercury achieved missions long enough to get to the Moon and back, perfected extra-vehicular activity, which involved spacewalks outside the spacecraft, and orbital manoeuvres necessary to achieve rendezvous and docking; all of which were essential if NASA were to be successful in their attempt to land men on the Moon.

Originally assigned as back-up pilot on the Gemini 9 mission, he and Tom Stafford were promoted to fly the mission when the original prime crew were killed in a plane crash just four months before launch.

The June 1966 mission is mostly remembered for Cernan’s ‘Spacewalk from Hell’, as he described it in his 1999 autobiography. During his two-hour excursion outside the spacecraft, he lost an incredible 10 and a half pounds in weight and suffered second-degree burns on his lower back after a suit malfunction.

Only three men have flown to the Moon twice; the two of those that walked on the surface on one of those occasions are Cernan and John Young, who incidentally flew around the Moon together, along with Commander Tom Stafford, on Apollo 10.

That mission was a dress-rehearsal for the Apollo 11 landing two months later and is known for attaining the universe record for the highest speed by any manned vehicle. The crew reached 24,791 miles per hour, the equivalent of 11.08 kilometres per second, in the command module on the journey home from lunar orbit on May 26, 1969.

Cernan and Stafford descended to 47,000 feet above the lunar surface in the Lunar Module while Young flew alone in the command module, and he reveals that this whetted his appetite to ultimately fly that final descent himself someday. “I felt like I hadn’t finished a job at 47,000 feet. It was like getting your finger close to the honey jar, but not getting the whole thing.”

Cernan mentions that after his first trip to the Moon on Apollo 10, he “desperately wanted to command” his own crew and that “the riskiest decision I made in the entire space program was telling my boss I didn’t want to walk on the Moon from the right seat.”

The final three Apollo missions are often termed the ‘J’ missions. They had a larger suite of experiments to conduct, and were longer-duration missions than the earlier flights. Armstrong and Aldrin spent only a matter of hours on the Moon on the first landing. In comparison, Cernan and his geologist-astronaut crewmate Jack Schmitt spent three days essentially living on the Moon in 1972.

One major new feature of these ‘J’ missions was the addition of the lunar rover to take the astronauts further away from the sanctity of the lunar module than ever before. When asked what it was like to drive, Cernan describes it as, “Wonderful, you know, in one-sixth gravity you hit a bump, you hit a small crater and you’re on three wheels most of the time.” Cernan also has the distinction of holding the lunar land speed record in the Rover, 11.2 miles per hour.

Landing his lunar module in the Moon’s spectacular Taurus-Littrow valley, Cernan seemed almost emotional as he described the crucial descent, “The clock is ticking all the way for fourteen minutes, all the way from 50,000 feet to when you touch down. And when you do touch down, all the noise, all the vibration, all the talking, is gone. It was the quietest moment of my life.”

Touching down on the Moon is a challenging test for any pilot, even after all the years of training and simulations. As Cernan puts it, “This is the real world, it has to happen now.” There really are only three options, he notes, “If you do it early enough you can abort with the ascent stage and get out of there; if you do it too late below 200 feet you’re gonna crash on the Moon, or you can do it successfully.”

Many have said that the Apollo astronauts journeyed to the Moon only to discover the Earth in the process. The first ‘Earthrise’ picture taken from lunar orbit on Apollo 8 showed people just how fragile we are here on planet Earth.

Cernan’s view of home on Apollo 17 is one he still recalls to this day. “On the rest of the landings, the Earth was up on top, they couldn’t see it. Mine was right out my window, so involuntarily you’re looking at gauges, you’re concentrating, you’re looking at the landing site, but the Earth is just staring you in the face. Unbelievable.” 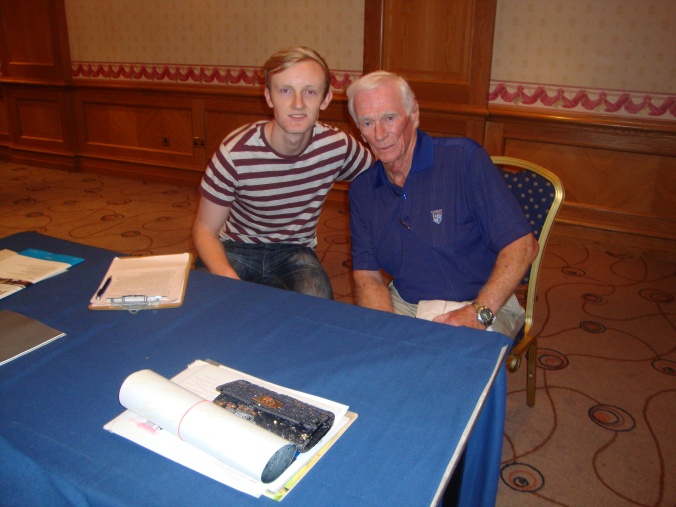 Cernan says he appreciates that as one of only twelve human beings in the history of mankind to have walked on the Moon, people look at him differently to how he looks at himself, but he says he considers that “a compliment.”

Even the most visually stunning photographs astronauts took on the Moon only tell us a fraction of what it would be like to walk there, but Cernan hopes the experience hasn’t changed who he is. “I’d like to think I’m the same person I was before I went to the Moon. I still put my pants on one leg at a time, I bleed when I cut myself, I understand joy and happiness, and there are still challenges in my life.”

One such challenge came about in September 2012, when Cernan was asked to give the eulogy at Washington’s National Cathedral at the memorial service of his good friend Neil Armstrong. “I had to talk about Neil Armstrong in less than three minutes, how about a challenge?”

Landing on aircraft carriers and flying to the Moon are undoubtedly pressure-filled situations, but this was a different kind of pressure. “I’m in a cathedral, on a big pulpit like the Pope looking at all those people, and knew the world was listening.” He admits that he went through a dozen drafts in a week before settling on a final eulogy.

The emotional few minutes that Cernan spoke were a fitting tribute to Armstrong, and also highlighted Cernan’s incredible way with words. Armstrong’s first words when stepping onto the Moon are indelibly engrained in the history books, but Cernan’s last words were equally as impressive. “As we leave the Moon at Taurus-Littrow, we leave as we came, and, God willing, as we shall return, with peace and hope for all mankind. Godspeed the crew of Apollo 17.”

When asked to draw upon any personal regrets from his own mission, he says that one thing in particular stands out. “That I didn’t have a camera in my hand to take the picture of the last footprint of Apollo, and take the picture of my daughter’s initials that I left there.”

Looking ahead to the future of manned space travel, one can only hope that the next lunar or even first martian explorers are able to describe the events as articulately as Cernan. His philosophical side comes out when he describes the moment after landing. “As the dust cleared we were looking out the windows, seeing what has never been seen with human eyes before.”

Approaching his eighties, Captain Cernan’s exploration days are behind him. Cernan is now an old man, but he still possesses that twinkle in his eye that symbolizes a life well-lived, so far.

The above interview with Captain Eugene Cernan (Gemini 9A, Apollo 10, Apollo 17) was exclusively conducted during the ‘Autographica’ event at the Hilton Metropole Hotel in Birmingham, UK on Sunday September 22nd, 2013.

2 thoughts on “The last of the Moon men”